The first of the March events in the Ontario 4v4 Circuit took place this past Saturday.

Perturbed Pachyderms were showing off their new outfits as they hit the fields in new jerseys. The new swag could not help them push past other teams in their first three games of the day however. They did have the distinction of giving eventual tournament winners Hazardiscs their toughest win of the day with a narrow 14-13 win for Hazardiscs.

Hazardiscs have been coming to a number of events this season, and have shown improvement each time. With a few additions to their roster, they were able to dominate at this tournament, posting a perfect 5-0 record, the only team to do so. Congrats on their tournament victory!

New team, The Bubble Ts, started off strong with a powerful victory over Force, but would fade in the 2nd half of the event with a narrow loss to Y&O, and a larger one to Hazardiscs. They wouldn’t let that get them down though and played all games with respect for their opponents and with the joy of playing on a Saturday morning. The Bubble Ts are our tournament Spirit Champions (and by a fair margin). Congrats folks!

Speaking of Y&O, they had an up and down event with wins over Perturbed Pachyderms, The Bubble Ts, and Faster 4s, but were unable to stop Force and Hazardiscs with sizable losses to both teams. The win vs Bubble Ts was especially noteworthy as Force lost to them, setting up a little three-way cycle. Their up and down performance would lead to them falling in the overall Ontario-wide rankings, which naturally pushed up a number of other teams.

Force would also rally to hold off Weebs, another new comer to the Circuit who hit with a splash. Weebs set a crushing pace in their first three games, winning each by a margin of at least 10 points. Though they would bounce back from their loss to Force, their final game against Monster would be a much closer finish, with just a 3 point difference.

Monster would have a good day overall with three wins on the day. It started with a win against the self-proclaimed The 2019 Snowplate Champs who signed up for this tournament after word came down that the yearly winter tournament, Snowplate in Sudbury, had been cancelled due to too much snow? We can only assume that too much ice may have been a larger factor in the decision.

Faster 4s and JusDISC league would both finish the day win-less, though both teams gave a good accounting of themselves and we saw some fantastic defensive bids from both teams. We look forward to having them both back at future events. As Hazardiscs have shown, the best way to improve is to play! 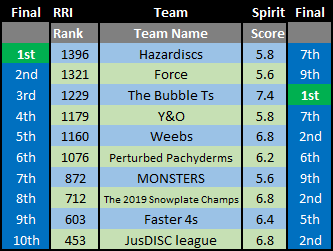 Captain Maggie Li has brought Hazardiscs to a lot of events through this season. Every single tournament they have been at has seen them steadily improve, capping it off with a win at March Mayhem.