On May 3rd, we like hundreds of other players across Ontario and Quebec, found out that TSSC’s Toronto Ultimate Festival (TUF) was cancelled. TUF is an early season outdoor tournament which many teams use for inter-regional play and final cuts for tryout prospects. Heavy rains the preceding week forced Sunnybrook to shut down to preserve quality for the rest of the season as it is the biggest sports fields venue in Toronto. TUF is an ordinary miracle and we can’t wait to see it back next year!

That same day, teams approached The Ultimate Experience and inquired about the possibility of organizing scrimmages in place of TUF. In three days, we confirmed turf fields, insurance certificates, and registered teams – and so was born Toronto Ultimate Rain Festival. 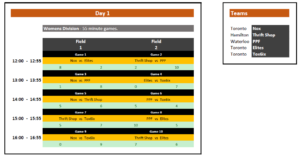 Note: PPF – Tox6ix was 4-4, +1 was given to PPF as they had the greater overall point differential.

The tournament was also the testing ground for our Stat Tracker.

Here are the goals and the assists leaders from the women’s division. Kaity Williams from Nox and Vikki Shimoda from Thrift Shop were the tournament assists and goals leaders, respectively!

*Melissa Dunbar, fondly known as Muff, is a special mention as the tournament’s stat-based MVP with 5 assists and 4 goals.

We envision our Stat Tracker to reveal statistical nuances in player chemistry and team match ups across seasons. If you are interested in getting your team involved, let us know!

That’s a wrap – we hope to see you at one of our tournaments this summer!

Check out Mixed Spirits in Fergus, June 3 & 4! Consider it Gender Blender but in place of an electric hum, it’s the cool rattle of a cocktail shaker.