The Ontario 4v4 Circuit continued it’s expansion into Mixed Master’s this past weekend. While we had originally intended the Mixed Master’s 4v4 tournament as a one-off, the vibe and reaction to the first one was so overwhelming that we added a second event. While it didn’t quite sell out, we attribute that more to the short notice and the long weekend – even so, we were delighted to welcome 10 teams to the Toronto Soccerplex. With some returning teams, this meant we could set up a ranked index for them. Find it below the summary!

Let’s get started with the recap by checking in with some of our returning teams.

Love Handles struggled a bit to get the same roster back, likely owing to the awesome 4CF tournament that took place in Hamilton on Sunday. They did slip a bit in the rankings as a result, however they still pulled together a great group of spirited people who could challenge even the best teams at the event on the field, as they posted the second tightest game against Freight Train To Glory. They also took on all challengers and were our Spirit Champions for the tournament. Congrats!

The train kept rolling all day, continuing to a second straight title win in the Mixed Master’s division, firmly cementing their position as the team to beat in this division. Freight Train To Glory was challenged to pull away from the pack quite as much this time around however. Though they won all their games, the ranked index shows that other teams closed the gap with the distance this time around being about 150 vs 250.

Newcomers to our Ontario 4v4 Circuit, Notorious KWG, played strong throughout the day, allowing them to slide into a respectable 2nd place. A narrow but fun game against Gun Show 4s Edition resulted in a 17-16 win for Notorious KWG, and they also won against Salty BCP. They would also go undefeated on the day. We look forward to seeing the summer version of this Mixed Master’s team from the Kitchener/Waterloo/Guelph area!

Speaking of BCP, last tournament’s bronze medal finishers came back with a split roster this time, entering Seasoned BCP and Salty BCP. Both teams I think discovered that they are stronger together than apart as they were unable to achieve the same results as last time, dropping slightly to finish 6th and 5th respectively. In a match that the organizers still feel there should have been post-game beers riding on, the head-to-head between the teams resulted in Salty BCP emerging victorious over Seasoned BCP, proving that you don’t need 11 herbs and spices to be great, just a little salt (and pepper, judging from the grey hair of some players). One other match here worth mentioning was the 1 point loss Seasoned BCP had to Gun Show 4s Edition, with a throw to the end-zone being released just a second after the whistle blew. Play stops dead on the whistle and this would have forced it to an overtime point.

A wise girl once said “‘Family’ means ‘no one gets left behind.’” Ohana, named for ‘family’ day hula’ed on the sidelines but were unable to come away with a win on the day. A great game (17-13) against Gun Show 4s Edition, shows that they know how to play though and we hope they had a good time at the tournament.

Torontosaurus Rex finished the day overall 9th, but a glance at the power rankings shows that they improved their overall game play, being the only team to improve their RRI, even as they dropped position overall with the addition of newcomers.

Four(ty), who according to Alyne had the best team name (she might be biased having helped to come up with it), played a solid day with a 4-1 record with a last minute 4-point comeback over Salty BCP.

Rounding out the field, Ye Olde MMV, went a respectable 2-3 on the day. Captained by Damian Horton, who was there at MMV’s inception in 2003, this team is in its 19th season this summer. Incredible, and no surprise that they would have a host of veteran players able to compete in this division! 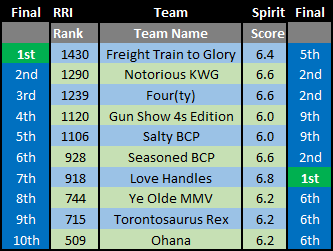 BCP, (the Seasoned or Salty kind), or Banana Cream Pie, has been a regular entry to the Toronto Ultimate Club for well over a decade. It’s core group of members have toured over the years on a variety of Toronto based teams across multiple divisions. Last year saw the team band together as a touring team and head to the World Masters Ultimate Club Championships (WMUCC). This year they return to the field looking to start another run. Learn more about them in our team feature coming soon. 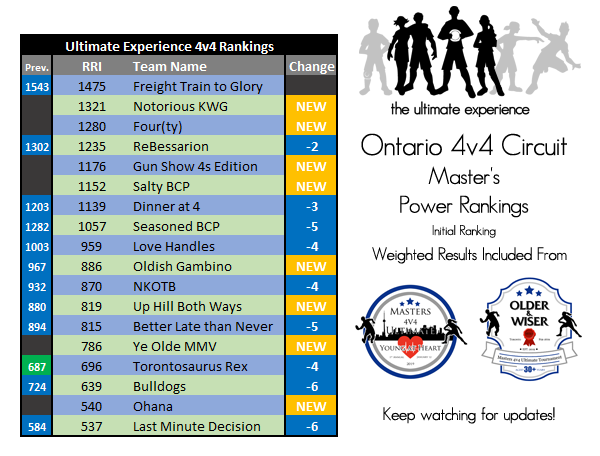